Netflix has renewed Sweet Tooth, the family adventure DC series executive produced by Robert Downy Jr. for a second season. Here’s what we know about the show’s second outing, including what to expect and when we could see it drop onto Netflix.

Based on the comic book by Jeff Lemire, the show developed by Jim Mickle touched down on Netflix on June 4th, 2021. It comes from Warner Brothers Television, DC Entertainment, and Team Downey.

The series is set in a post-apocalyptic future where a viral pandemic wipes out most of the world’s population. It also sees the birth of hybrid babies. Our story focuses on Gus, a young boy who is half-human half- deer living in a remote location with his father.

How well did Sweet Tooth perform on Netflix?

The top 10s are often indicative of how well a show performs on Netflix too.

Our tracking and data provided by FlixPatrol suggest the show was a hit in almost all Netflix regions. We’ve seen this year that most shows that can stick in the top 10s in at least one region are going to get a new season.

In the United States, the show was in the top 10s for around 30 days. In the UK, that number was 32 days. In fact, almost every region of Netflix that FlixPatrol monitors suggest the show was a hit around the world.

It remains number 2 in the world for 2 weeks after launch.

In addition, in Netflix’s Q2 earnings report, they revealed how many people had sampled the show (2-minute viewing). They revealed that 60,000,000 households had checked out the show.

60 million places Sweet Tooth at the number 6 spot on the most-watched (announced statistics) English series list, just behind The Queen’s Gambit at 62 million and just ahead of Emily in Paris at 58 million.

The show also performed well critically with a 7.4 user score on Metacritic and a 78 from the critics. Over on IMDb, the show boasts a 7.9.

Nielsen has also featured the show four times in its top 10s recording 3,213 million minutes watched thus far (their data only applies to the US).

Has Sweet Tooth been renewed for season 2?

As a big-budget show, it’s always hard to know whether it’s going to get an instant renewal or not. Thankfully, it looks like Sweet Tooth did the numbers for Netflix and warranted a second season that was announced on July 29th, 2021.

There had been numerous rumors floating since the show’s release of renewal, but now it’s official.

Some expected Netflix to announce season 2 at Geeked Week however, only the bloopers were released that week.

The announcement saw numerous members of the cast and some select outlets (not us – sad face) receive a bar of chocolate with the news.

Alongside the bar of chocolate came a note saying: 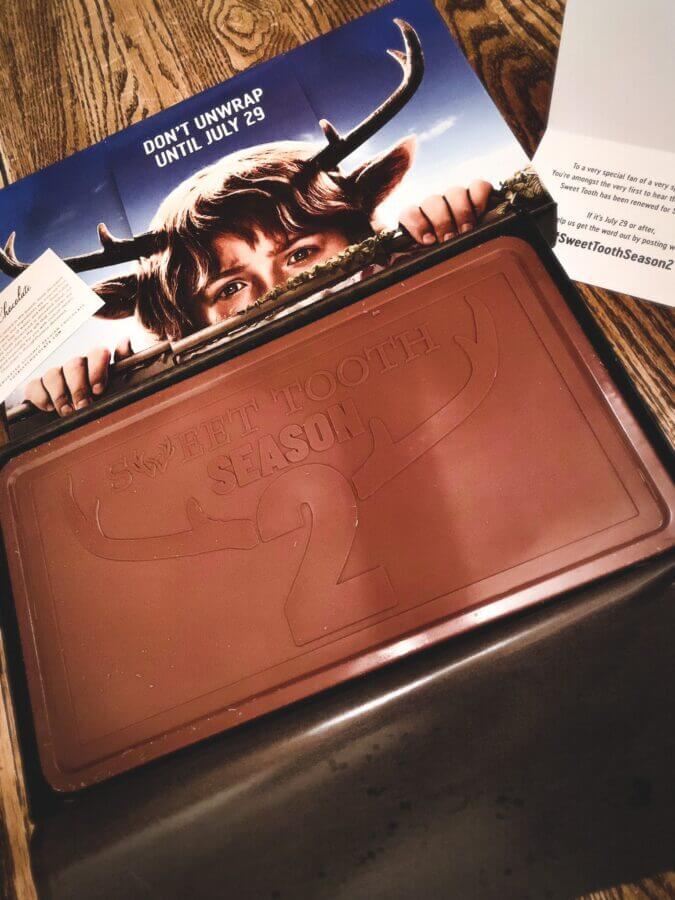 We’re told the show is being actively developed as of July 2021 and no filming dates have yet been set. However, we do know the show will return to Auckland, New Zealand to film. ProductionWeekly lists Jim Mickle and Beth Schwartz for show running duties for season 2.

In a statement, Jim Mickle said:

“It’s been equally thrilling and heartwarming to experience how people around the world have been falling in love with our deer-boy. We couldn’t be more excited to continue our collaboration with Netflix and keep following Gus and his friends on their extraordinary journey.”

Oanh Ly will join season 2 as a co-executive producer.

The cast celebrated the news of season 2 via a video message posted on Twitter.

What to expect from Sweet Tooth season 2 at Netflix

As the show is following the comics quite closely, you’ll know there’s plenty more story to tell.

We finally know where Gus’s mother is (Alaska) so we could see them voyage north. It’s believed that she’s up there searching for the cure.

By the end of season 1, Gus had been captured by The Last Men, although a plan to save him and other kids look to be in action. The good news is that Big Man although wounded looks to have survived his wounds.

Here are some of the other standout recaps from the final episode:

We also hope to find out more on the origin of the virus which caused the mutations in the first place. We may not see that information divulged in the series but it did eventually get revealed in the comics on issue 26. There’s a good summary of how the virus came to be from DigitalSpy but only read if you’d rather know before it gets revealed in the show.

You can read more fan theories on what we can expect from season 2 of Sweet Tooth here.

When will Sweet Tooth season 2 be on Netflix?

This is impossible to say without knowledge of when the show is due to begin production.

Our best guess, however, is that it won’t be on our screens until at least late 2022.

Are you excited to see the return of Sweet Tooth on Netflix? Let us know in the comments down below.