We’ve learned in recent weeks about the upcoming movie adaptation of the broadway musical Matilda, including, how the feature won’t be released on Netflix until December 2022. We’re keeping track of everything you need to know about Matilda, including the plot, cast, production updates, and the Netflix release date.

Matilda is an upcoming Netflix Original musical directed by Matthew Warchus, and based on the stage musical of the same name by writer Dennis Kelly.

Tim Minchin, a well-known comedian, and musician is on board to compose the music for the movie too.

Carrying out the production of Matilda is Working Title Films. The studio is famous for its production of fellow musicals such as Billy Elliot, Les Miserables, and most recently the infamous film adaptation of Cats.

It’s one of the many Roald Dahl adaptations Netflix is currently working on which also includes an animated series by Taika Waititi.

When is Matilda coming to Netflix?

We were previously expecting to see Matilda on Netflix in 2021 but according to Playbill Matilda is now scheduled to be released in December 2022.

The musical will be released in theatres in the U.K. and Ireland on December 2nd, 2022.  Meanwhile, Netflix will release the movie as an original in select regions around the world.

What is the plot of Matilda?

The plot was announced alongside the initial reveal for the movie:

Matilda, a young, gifted, and incredibly intelligent five-and-a-half-year-old struggles with the stupidity of her family.

At school, Matilda makes friends with the lovely Miss Honey and is finally able to show her intellectual prowess. Unfortunately, the school is run by the tyrannical Miss Trunchbull who takes pride in giving harsh punishments to the students. When Matilda develops telekinetic powers, she enlists the help of Miss Honey and they work together to stop Miss Trunchbull.

Who are the cast members of Matilda: The Musical?

Previously, it was tradition for a male cast member to portray the role of Miss Trunchbull, the evil headmistress of Crunchem Hall Primary School in a production of Matilda. However, this will change for the movie adaptation as Emma Thompson has replaced the previously cast Ralph Fiennes.

It hasn’t been announced why Ralph Fiennes stepped down from the role, but we’re certain he would have made for a hilarious Miss Trunchbull.

Ralph Fiennes (left) and Elliot Harper as Miss Trunchbull in the West End production of Matilda: The Musical

Previously, Emma Stone was approached for the role of Miss Honey, but the role has since been occupied by Lashana Lynch, who Marvel fans will recognize as Maria Rambeau in Captain Marvel. The actress will also star as Nomi in the upcoming James Bond movie No Time to Die. 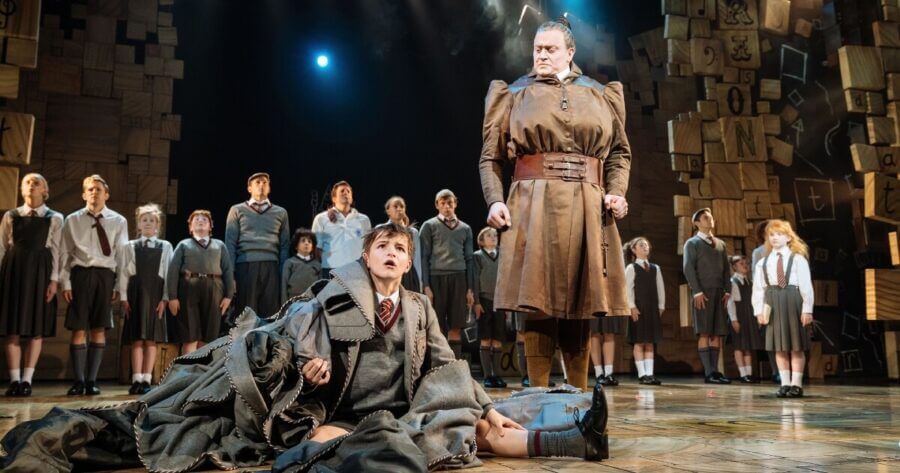 The Royal Shakespeare production of Matilda: The Musical

We have the full list for the main and supporting roles of Matilda:

The music of Matilda: The Musical

If you’re curious to learn more about the music of Matilda you can check out the full album from the Orginal London cast recording on Spotify:

If you don’t wish to be spoiled before the arrival of the musical on Netflix, we’d avoid listening to the album.

Alternatively, here’s a snippet of what to expect from Matilda with the live performance of Naughty at the 2013 Olivier Awards.

Are you excited about the Netflix release of Matilda? Let us know in the comments below!

Netflix’s ‘The Sandman’: Filming Wrapped Up & What We Know So Far