Hache, Netflix’s huge crime thriller series from Spain looks to have come to an end after season 2 despite deliberately setting up a third season. While we’re still waiting on official confirmation that Hache won’t be back for season 3, we do believe that it now won’t.

Inspired by real events, the series has gone on to become one of the highest-rated (at least among viewers) Spanish series on Netflix around the world.

Season 1 of the show first debuted back in November 2019 with the subsequent second season touching down February 2021. The show was renewed almost instantaneously after the first season and was originally due to arrive in 2020.

Why Hache is Unlikely to Return for Season 3 at Netflix

Despite setting up a third season, it would appear that it’s not due to happen.

Some Spanish outlets were positive about the possibility of the show returning with some even predicting a 2022/2023 release date.

In an interview with Serielizados, the creator of the show Verónica Fernández told them (translated via Google Translate: “I think the Hache universe is great and we want to keep exploring. We have ideas. We are also very eager to see if people get hooked. I think it is the people who will give us the second and third seasons if necessary.”

Carlos Lopez Garcia who served as one of the main writers for the show looks to have moved onto a new project in July 2020 for which he’ll serve as the creator. July 2020 would’ve been around the time the second season of the show was coming to an end in either pre-production or production so this lines up. 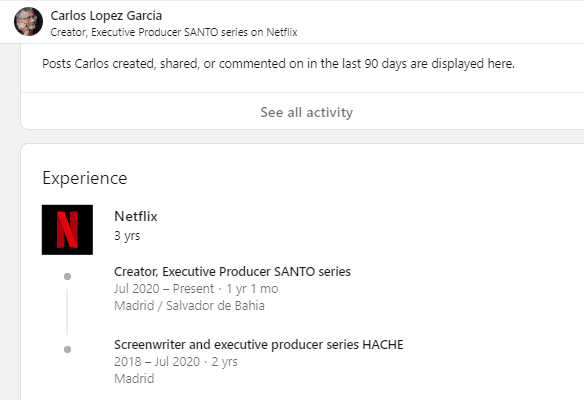 Carlos is not the only one who has moved onto other projects.

Verónica Fernández who bought the series to Netflix from Weekend Studios now works with Netflix full time. She’s currently involved in two upcoming projects including Intimidad (slated for a 2021 release) and Intimacy.

Top 10 data for the second season could provide some level of insight on the show’s performance. We saw that it only managed to enter the top 10s in a handful of countries. Spain had the show in the top 10 for the longest but that was only for 13 days before dropping out. We’ve seen with many cancelations in 2021 that shows typically have to be sticky for around 28 days in at least one region to continue.

Now, it still isn’t definitive the show isn’t coming back but it does have all the telltale signs that the main talent behind the show has all moved onto new Netflix projects.

We have reached out to our EU Netflix contact and haven’t immediately heard back. We’ll update once we have more.

Would you have liked to have seen Hache return for season 3 on Netflix? Let us know in the comments.