There is no denying that one of the many reasons to watch Netflix’s Cobra Kai, is for the elaborate fight sequences. Smack dab in middle of all the action you will find stunt coordinator and performer Jahnel Curfman. Below is an interview with her role within the Cobra Kai series.

Curfman has served as the show’s stunt coordinator alongside Hiro Koda on Seasons 2 and 3 and also served as Peyton List’s stunt double. Some of Curfman’s other credits impressively include being Karen Gillan’s stunt double on Jumanji: Welcome to the Jungle and Jumanji: The Next Level, as well as Sandra Bullock’s for Bird Box. Currently, Curfman is Emmy-nominated for Outstanding Stunt Performance for the Cobra Kai episode titled “December 19”.

In honor of the recent nomination, we conducted the below Q&A with her and discussed everything around Cobra Kai Season 3.

WON: First off, congrats on the Emmy nomination for “Outstanding Stunt Performance”. 2021 is the first year this category has been around. How does it feel to be recognized in this category? Is the creation of this category long overdue in your opinion?

WON: Why do you think the Academy decided to add this category?

JC: Stunt performance is a huge part of our industry but, has been long overlooked by other academies. The truth is without outstanding  stunt performers, many of the shows on television would not be what they are. I think the Academy recognizes the importance of what we contribute to these shows.

WON: You are nominated for the episode titled “December 19”. Why do you think the stunt performances in this episode stuck out to voters so much?

JC: John, Josh, and Hayden wanted everything bigger and better than the previous season. They really challenged Hiro and me to go all out. “December 19” was the finale episode so, the action sequences had to reflect the emotional buildup of the entire season and that’s what I think resonates with the audience. You’ve got all of the characters in these complex relationships that are translating to fight choreography between one another. 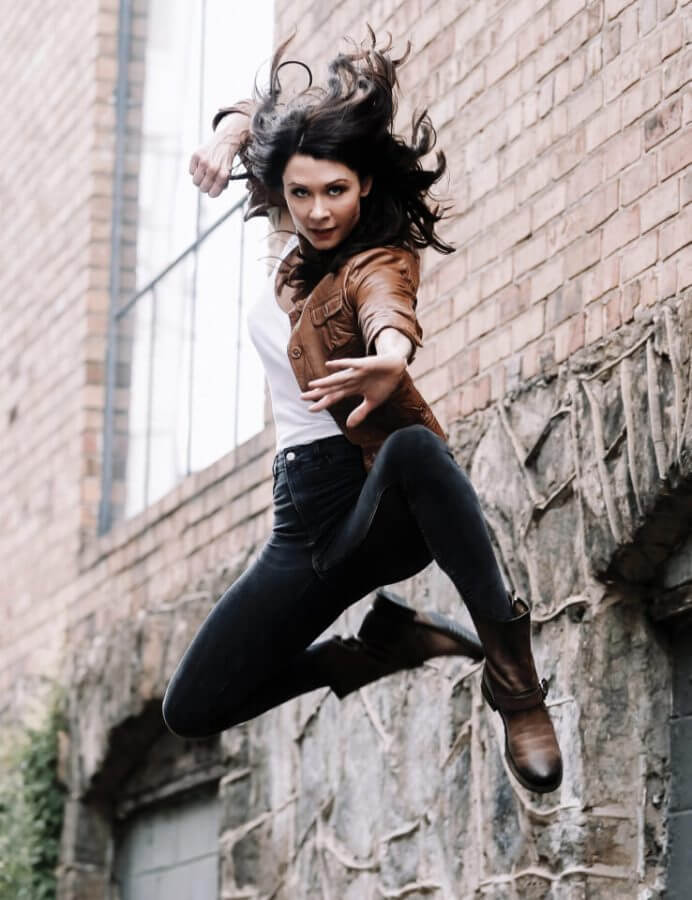 WON: Typically, how long do you have to train with Peyton before doing the stunts in front of the camera?

JC: Peyton is a fast learner so she picks up the choreography quickly. What we spend time on is perfecting each move so it’s clean, crisp, and powerful. I like to have a full week or two for new sequences but scheduling gets tight by the end of the season so, she’ll usually learn it a few days before performing.

WON: The fight between Tory and Sam in the Season 3 finale is pretty epic. You had to use nunchucks for that particular fight. Did you know how to use these before your work on the show, or did you train with them just for this project?

JC: I had worked with nunchucks before. I enjoy working with weapons and it was exciting to incorporate them into the fight between Sam and Tory. Peyton did great with them!

WON: In that final fight, you get pelted in the back with a bo staff and thrown against the wall. What is the key to making this look as realistic as possible? Do you actually get hit when doing this, just not very hard?

JC: One of the keys to making hits like that one look realistic is something we call reactions. Reacting to a hit to make it look more violent and dramatic than it really is. And yes, for that particular shot to sell for camera, Mary had to make contact on my back with the bo staff. That’s one of the reasons we use stunt performers instead of actors for certain shots.

WON: The hardest stunt sequence of Season 3 was the final fight in the house, because it was done in 1 shot. How many times did you have to film this sequence to land it perfectly? I imagine landing all those marks is pretty difficult?

JC: I don’t remember the exact number of takes we did for that shot but, I think it was somewhere around 10. A one-er is tricky because, like you said, you have to hit all of the marks perfectly from beginning to end. If one hit was a miss or something didn’t go correctly, we immediately had to cut and start over.

WON: What was your favorite episode from Season 3? Why?

JC: The final episode of season 3 was so action packed. I enjoyed watching that one because I knew how much work the stunt team and cast had put into making it one of the best of the series.

WON: A lot of critics have said that Season 3 is darker and riskier. Do you agree with this?

JC: Yeah, I would agree with that. I think that by exploring Kreese’s backstory, it naturally led it in a darker direction than we saw in the first two seasons.

WON: Can you reveal any fun, behind the scenes stories, that we might not know about from Season 3?

JC: The final fight in the Larusso house was originally supposed to take place in the Miyagi -Do yard. They changed it last minute due to the weather!

We hope you enjoyed this interview with Jahnel Curfman, if you’re looking for more on Cobra Kai, check out our preview for season 4 which is set to arrive in December.